Many visceral organs of the body, including all of the high priority organs (heart, lungs, bladder, stomach, colon) for SPARC, undergo large deformations – hearts beat; lungs breathe; the bladder fills and empties; the stomach and colon, like the rest of the gut, are subject to large propagating waves of contraction. It is therefore imperative that any attempt to map the neurons within these organs must define the neurons and their cell bodies with respect to a three-dimensional (3D) material coordinate system within each organ (see Figure 1). The organs themselves also move concerning the body that contains them, and the body moves with respect to the outside world. The embedding of organs within the body is described at the end of this section.

The Finite Element Method (FEM) that is widely used in the engineering world is a compelling way to capture the intricacies of anatomical domains. The basic idea is that a physical domain (in this case an anatomical region of the body) is divided into subdomains (“elements”) joined via common nodes as illustrated (this is called a finite element ‘mesh’). The field within an element is an interpolation using element basis functions of values of the field defined at the nodes (called the ‘nodal parameters’). The material space (represented by the element coordinates) can be refined to any degree to ensure that sufficient nodal parameters are available to match the resolution of the experimental data being mapped on that mesh.

An essential feature of a 3D material coordinate system for organs is that it can deal with anatomical differences both within a species (individual differences) and across multiple species to enable cross-species comparisons. This can prove difficult when different species exhibit topological differences – as, for example, the varying numbers of pulmonary veins that enter the left atrium (typically 3 for rats, 4 for humans, and 2 for pigs). Another feature of mammals is that anatomical structures are generally smooth – there are none of the sharp edges typical of engineering structures. To meet these requirements, we have developed Computer-Aided Design (CAD) software called Scaffold-Maker, specifically for creating 3D material coordinate systems for body organs. Note that the term ‘material’ is used because these coordinates effectively identify the position of any material (tissue) particle, independent of its location in 3D space or how distorted it is. We could use the term ‘tissue coordinates’ rather than ‘material coordinates’, but the idea is more general – for example, a material coordinate position inside a deforming human body locates a unique material point in the body, but this is not necessarily part of a tissue (e.g., it could be in the middle of an airway). We call the 3D material coordinate system for an organ, a ‘scaffold’ because it is a coordinate framework into which many different aspects of tissue structure can be assembled, including muscle fibre orientations, vascular geometry, neural pathways and the spatial distributions of genomic data. The anatomical scaffolds are generated from connected, simple-shaped elements to follow the features of an organ or other anatomical part. A combination of the element plus local coordinates within the scaffold gives a material coordinate system labelling the same piece of tissue across all configurations for an individual or an equivalent anatomical location across multiple individuals.

Figure 1. An Example of mapping from material space to physical space. A tri-cubic Hermite space to a 3D volume in 3D physical space using the heart scaffold (a-b). The initial heart scaffold (a) is deformed (b) to illustrate the fact that a material point (e.g., the red sphere) retains the same material coordinates () throughout a translation and deformation of the tissue. A scalar field from material space (c) to physical space (d) on a 3D domain is also shown for both geometric and scalar fields. In addition, an example of a domain refinement (e) of the deformed cube into subdomains or ‘elements’ is illustrated.

Stomach scaffolds are available for the following species:

An anatomically-based 3D scaffold of the stomach is created to map nerve-ending pathways. A symmetrical stomach scaffold is generated with a configurable central path defined from the fundus apex to the duodenum. A user can annotate the fundus, body, antrum, pylorus, and duodenum along the central path and define the stomach's respective regions. The cross axes of the central path provide control of the major and minor radii of the stomach in different sections. The rat stomach scaffold is parameterized with average data from segmentation of Micro-CT image data of 11 animals performed at the Powley laboratory using Neurolucida (MBF Bioscience), while the human stomach is parameterized with data to represent the anatomy as accurate as possible.

Colon scaffolds are available for the following species:

The colon scaffold is designed topologically as a tube defined by a central line which follows the path of a colon traced from an image, which could be obtained from photography, CT or MRI. The scaffold is capable of representing the characteristics observed in the cross-sectional profiles of colons from different species. For instance, mouse colon presents a tubular structure due to the absence of tenia coli, whereas both human and pigs have more of a haustral sacs appearance due to the presence of tenia coli. The colon scaffold’s haustra are currently very regular and are representative rather than matching any individual. The ability to control dimensions such as colon diameter, wall thickness, and tenia coli properties, as well as variations of these properties throughout the entire length of the colon allows the scaffold to be configurable for different center paths and sizes to support other species and individuals.

The following lung scaffolds are available:

An anatomically-based 3D scaffold of the lungs is created to visualize various data (such as neural network, blood vessel, and ventilation) on a 3D structure of the lungs. The lung scaffold was independently designed for the human, mouse, and rat based on the anatomical structures of the lungs in each species. For instance, a rodent has one lobe in the left lung and an accessory lobe in the right lung, while a human has two lobes (upper and lower lobes) in the left lung and no accessory lobe. Thereby, the lung scaffolds are able to represent and annotate the anatomical structure of the lungs in each species accurately.

We are also building a scaffold for the trachea and airways. We started with creating a bifurcation tree with a bifurcation tube at the end of each branch. 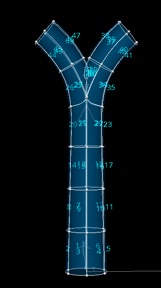 However, the bifurcation tube twisted at the end of each branch due to the smoothness and the complexity of the bifurcation tree, and we are working on the algorithm to deal with this problem. The next step for the trachea scaffold is to fit a dataset to it, and we are currently looking for a suitable dataset.

Bladder scaffolds for the following species are available:

As with the other organ systems, the lower urinary tract (LUT) contains different sub-scaffolds consisting of the bladder, its ureters, and the urethra. The bladder scaffold consists of different tissue layers to represent the smooth muscles as well as the epithelial region. The smooth muscle layer transitions gradually into skeletal muscles as we move down the neck of the bladder into the urethra. The neck of the bladder is represented in the scaffold as a narrowing of the body at the region where ureters penetrate the surface into the lumen of the bladder. The scaffold has two different parameter sets for the rat and cat species, which are very similar in nature but have small, intricate differences. The parameters include the diameters for different axes, wall thickness, neck angle (for bladder only), etc., which are all defined for the bladder and urethra separately. Importantly, the entire scaffold is generated based on a central path defined by the user, which facilitates the initialization of the shape as well as an annotation.

To define the realistic anatomy of the LUT, tissue samples for three male and female rats were provided by Janet Keast et al. from the University of Melbourne to the ABI MAP-Core for high-resolution microCT imaging. The structures and layers of interest from the images were then segmented using the MBF Tissue Mapper software. This was to provide data to fit a scaffold into the geometry of the organ in the image. The scaffold can now be used to register and map various data, including neurons, or to define time-varying fields such as pressure or volume measured experimentally.

Additionally, an anatomically-based 3D scaffold for human bladders is created. This scaffold can be used to register and map various data, including neurons, or define time-varying fields such as pressure or volume measured experimentally. The scaffold is generated based on a central path from the apex to the neck of the bladder and the urethra. Different parameters provide control of the shape of the scaffold, which is defined for the bladder and the urethra separately. These parameters include major and minor diameter, wall thickness and neck angle (for bladder only), etc. Users can initialize the shape of the scaffold and annotate the body and neck of the bladder and the urethra along the central path. The human bladder scaffold was calibrated using the data from the Anatomography team (BodyParts3D V4.3i; DOI:10.1093/nar/gkn613)

The annotation groups for the bladder scaffolds (all three species) have been modified. In addition, some fiducial markers have been added to the scaffold to improve the fitting process and facilitate the embedding of the bladder in the body scaffold.

Heart scaffolds are available for the following species:

New release for the heart with improved pulmonary vein element shapes for all species. Additionally, a number of new markers have been introduced and embedded in these versions that facilitate the embedding of the heart in the body scaffold.

Brainstem scaffolds are available for the following species:

Each dataset also contains exported versions of the scaffolds in webGL and VTK formats. The webGL export is primarily intended for use in visualizing and interacting with the scaffolds on the SPARC Portal. The VTK export can be used by any tools which work with the VTK format.

The webGL visualization is done by using ZincJS library and the ScaffoldVuer component on sparc-app.